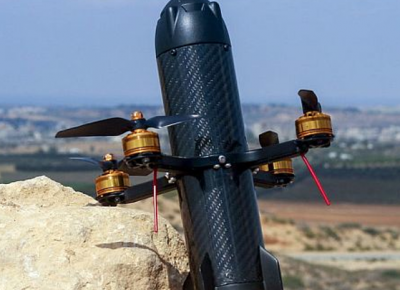 An unmanned aerial vehicle (UAV) (or uncrewed aerial vehicle, commonly known as a drone) is an aircraft without a human pilot on board. UAVs are a component of an unmanned aircraft system (UAS); which include a UAV, a ground-based controller, and a system of communications between the two.

If an apparently hostile drone appears to be threatening some sort of attack, the “DroneBullet” offers a swift solution; it will outmaneuver and then destroy the offending UAV by ramming it at high speed. AerialX, a six-year-old company based in Vancouver, British Columbia offers a patent-pending solution for ridding the sky of hostile UAVs when the need to act is urgent. As reported at MilitaryAerospace.com, the 910-gram DroneBullet is a highly maneuverable quadcopter multirotor with a 4-kilometer range and a speed approaching 220mph in a dive attack.  DroneBullet approaches and then locks onto the target drone, then uses its own kinetic energy to knock it out of the sky by ramming it.